Dead Pixels TV show cancelled or renewed? Learn about the cancellation status of Dead Pixels below. 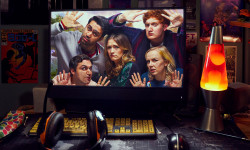 The show Dead Pixels focuses on three friends who are obsessed with a fictional game called Kingdom Scrolls. The main characters, Meg and Nicky have been playing the same character for 7 years straight without taking any breaks in between which is not normal behavior but their friend Usman encourages them to continue because they think that it will get easier if they just keep going since every time you level up your stats increase exponentially.