Lucifer TV show cancelled or renewed? Will there be Lucifer Season 6? Learn about the cancellation status of Lucifer below. 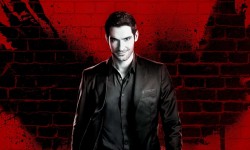 In the series "Lucifer," Tom Ellis plays a handsome and powerful angel who was cast out of Heaven for his rebellious ways. As Lucifer, he tires of eons spent punishing people in hell and abdicates his throne to defy God (his father). When bored with life on Earth, he moves back down below into Los Angeles where he opens up an underground nightclub called Lux that caters only to those living outside society's rules. It is there that our protagonist meets Detective Chloe Decker (Lauren German), investigating a murder at said club--a case which starts him on one wild adventure after another!