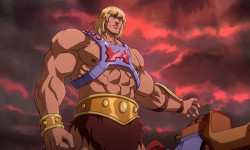 A direct sequel to the He-Man series, the story follows He-Man, Orko, Cringer and Man-At-Arms as they protect Castle Grayskull from Skeletor's army. However a final battle fractures Eternia forever which is when Teela steps up to the plate for her kingdom in order to save them all before it's too late. Her journey will uncover secrets about herself and what she can do with or without the power of Grayskul!