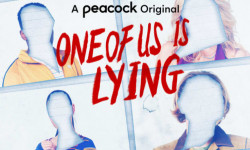 One of Us Is Lying Series Information:

A group of five students at Bayview High are given detention, but one student (Simon) dies. The other four have reasons to kill him and their own motives for doing so: Simon is known as the school's gossip queen who likes to make snide remarks about his classmates in public forums online; Brownyn has had a crush on Nate since her first day of high school with no luck; Addy was mad that he called her stupid all the time during class discussions even though she always got better grades than he did anyway, and Cooper hates how self-centered Simon can be when they're working together on projects. When it becomes clear there’s more going on here than an unfortunate accident—the authorities launch an investigation.