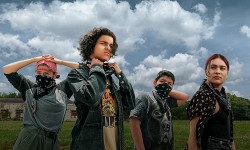 The series, which is like a modern-day Dances With Wolves meets Breaking Bad, features four rough and tumble teenagers who cuss, fight and steal their way towards adulthood in rural Oklahoma. Filmed entirely on the Muscogee Nation reservation with all Indigenous writers/directors/regulars this half-hour comedy streamlines cable TV's first ever show of its kind.