Schmigadoon TV show cancelled or renewed? Learn about the cancellation status of Schmigadoon below. 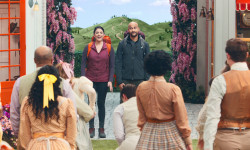 "Schmigadoon!" is a new musical comedy series created by and starring Emmy Award winner Keegan-Michael Key and Emmy Award nominee Cecily Strong. It parodies iconic Broadway musicals with modern twists for today's audiences! The show follows our protagonists who had to take an unconventional backpacking trip in order to revive their relationship, only to find themselves stuck in the magical town of Schmigadhoom where everyone was living out their lives as characters from old Hollywood studio movies during World War II.