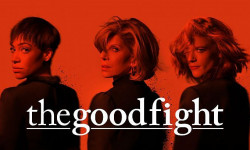 What is Memo 618? We're about to find out. "The Good Fight" returns to CBS All Access on Thursday, April 9th. Here's the latest on season four:

What is "The Good Fight"?

"The Good Fight" is a legal drama and a CBS spinoff of "The Good Wife." Here's the official series synopsis from CBS:

"The Good Fight picks up one year after the events of the final broadcast episode of 'The Good Wife.' In the new series, an enormous financial scam has destroyed the reputation of a young lawyer, Maia, while simultaneously wiping out her mentor Diane Lockhart’s savings. Forced out of Lockhart & Lee, they join Lucca Quinn at one of Chicago’s pre-eminent law firms."

What is "The Good Fight" Season 4 about?

Reddick, Boseman & Lockhart are in a very different place at the end of season three from where they started. After losing their biggest client, Chumhum, and having their founding partner's name dragged through the mud, they are forced to become a subsidiary of STR Laurie, a multi-national law firm. This buy-out results in a massive loss of decision-making power. "While STR Laurie initially seem like benevolent overlords, we find Diane Lockhart and her colleagues chafing at their loss of independence while simultaneously investigating the emergence of a mysterious 'Memo 618'," CBS' official teaser reads.

Season 4 will take a look at the legal impact of political fights that many viewers will already recognize from headlines in the news. TVLine spoke to series co-creator Robert King ahead of the premiere. "We’re going to comment more on what the current political situation is doing to the law, and some of that has to do with Trump directly but a lot of it has to do with the collateral damage of the dropping of present-day values and guidelines,” King told TVLine. “There’s a tendency that people have now of thinking subpoenas can be ignored, and we wanted to look at how it played out because so much of courtroom drama requires people following the rules. But what kind of courtroom drama do you have if [suddenly the rules don’t matter]?”

Who stars in "The Good Fight"?

Where can I watch "The Good Fight"?

"The Good Fight" is a CBS exclusive, meaning that all 10 episodes of season four will only be available on CBS All Access. Season 1-3 are currently available to watch on the streaming platform. Season 4 Episode 1 will premiere on CBS All Access on April 9th. Episodes will be released weekly on Thursdays.