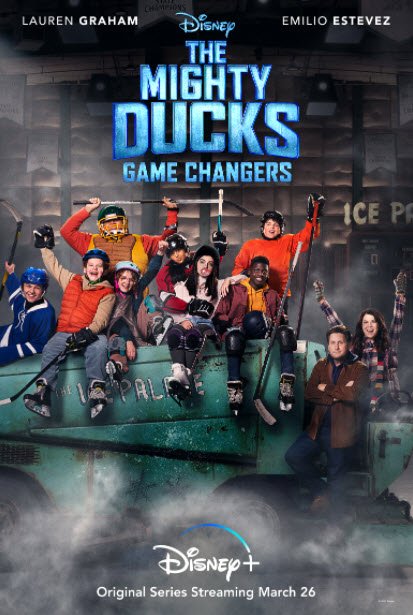 Here's what we know about the show so far:

What is "The Mighty Ducks: Game Changers" about?
The all-new original series is set in present-day Minnesota, as the Mighty Ducks have transformed from shabby underdogs to a super-competitive, livewire young hockey team. After 12-year-old Evan Morrow (Brady Noon) is abruptly cut off from the Ducks, he and his mother, Alex (Lauren Graham), set off to create their own team of oddballs to compete against the ruthless, win-at-all-costs ethos of adolescent sports today. With the assistance of Ducks legendary coach Gordon Bombay (Emilio Estevez), they relive the pleasures of playing simply for the love of the game.

Bombay had last seen The Mighty Ducks triumphant on the ice in D3: The Mighty Ducks, 25 years earlier. Plenty has happened since then, when he comes back onscreen in Disney+'s new series The Mighty Ducks: Game Changers, brace yourselves to see a very different Bombay.

ABC Signature and Brillstein Entertainment will be producing the new addition to Disney +. ABC started shooting the series in January 2018. The series was originally scheduled to begin a little earlier, but like most of the other recently released series, it was held back due to Covid-19 restrictions.

Some of the other legendary characters who make a comeback in the Disney+ series includes:

Marguerite Moreau as Connie Moreau, Garette Ratliff Henson as Guy Germaine, Elden Henson as Fulton Reed, Vincent Larusso as Adam Banks, Justin Wong as Kenny Wu, and Matt Doherty as Lester Averman. But it won't be until sometime later in the season. Otherwise, the series is led by Lauren Graham, Brady Noon, and Maxwell Simkins, as well as a whole new fun team of hockey misfits.

For even more The Might Ducks: Game Changers cancellation/renewal news, see here.