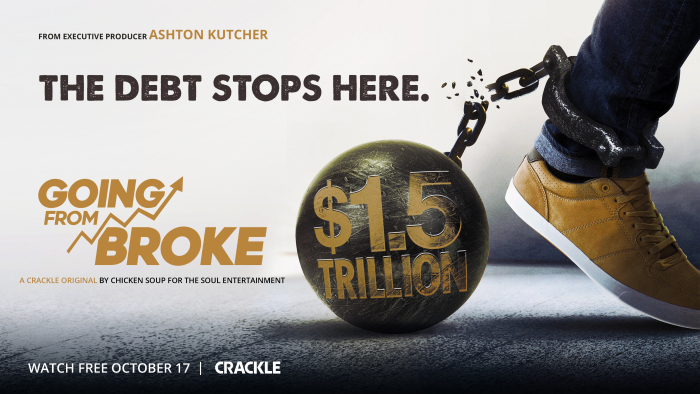 About Going From Broke TV Series

It's an epidemic of huge proportions. As a nation, over 44 million Americans collectively owe a whopping $1.5 trillion in federal student loan debt, a number that grows each year and is second only to mortgage debt in America. Upon graduation, those entering the professional world face mounds of bills, a shrinking pool of employment opportunities, a lack of financial skills and a constant, crippling weight of oppression keeping them from reaching for their dreams. Tackling this issue head on is a new Crackle Original, Going From Broke, a new series from executive producer Ashton Kutcher, Matador Content and Chicken Soup for the Soul Entertainment, launching Thursday, October 17th exclusively on the free streaming service. Leading the charge to support millennials in overcoming their crippling financial struggles is host Dan Rosensweig, Chegg CEO, and financial expert Danetha Doe who go one on one with young people living in pricey Los Angeles, what they thought would be The City of Dreams, to change their habits, gain financial confidence and become CEO of their own lives. Although they all come from different backgrounds and circumstances, each of the participants have one thing in common-- extreme debt. Rosensweig and Doe challenge millennials to address everything from savings and spending to taxes, bills, co-loans and more. Ultimately, each of the subjects are given "homework," tailored next steps meant to be tackled within a specific and timely window. It's not comfortable, it's not easy, but it's necessary if they want financial stability. Throughout each of the 10 half-hours, viewers also get valuable insights and advice from several leading and trusted experts including award-winning personal finance journalist Jean Chatzky and Farnoosh Tarobi, bestselling author and podcast reporter.

Never miss the release of Going From Broke: favorite this page or subscribe to TVReleaseDates.com to receive free weekly release dates right into your inbox!: